Got home early with a seriously painful foot (don't ask).

Danny Glover and Julia Stiles shot some of Gospel Hill about a block away this weekend. Apparently they needed a lot of ice, because one of the caterers had a few shopping carts full at the local Bi-Lo Saturday afternoon.

Much of my time since then has been spent imagining what one could do with a hundred pounds of ice and Julia Stiles.

I just got a phone call from my technical leader for the day job. I'd been planning to work though the end of next week, but they want me to wrap up what I'm working on now, and finish this week.

Not getting the money for the final week hurts, but I think the thing that's really scary is that I'm going to be the full time (times three) owner of a cafe in four days. No backup.

But I leapt. And flew through the air with a million tiny mirrors, lenses, prisms. And as I fell I no longer feared, as I plunged into the clean cool turbulent water.

I've been a little under the weather, but still doing a lot of stuff.

This weekend a lot of work was done at the cafe. There are now four (out of six if I can pull it off) coats of poly on the tables. They're looking pretty glossy, and I expect the extra coats won't make them look any better, but will protect the surfaces nicely.

We also got six 4x4x8 posts set in concrete that will become the skeleton of the dumpster area sometime this week. As far as I can tell this is the last seriously physical labor we need to do before the cafe opens (other than toting around heavy equipment).

My buddy Graeme flew in last week and he's been an enormous help with the heavy work, despite the fact that this is supposed to be a vacation for him. I suppose it's more interesting than jacking up a sagging porch which I made him help me with on a previous trip.

I haven't posted here for a while because I've been updating (well such as it is) the blog where I admit I'm leaving my cushy, but not fulfilling software job and open a cafe. At first it was to keep "competition" from trolling information about what's happening, but it sort of just became habit. I'll be opening in the next few months, and I'm in a small town so everyone who wants to know what's happening probably does already. So away with the subterfuge, I'm outing myself. I'm a techie who wants to change careers and so I'm risking it all to open a business where I'll work three times the hours (okay well twice the hours I'm working now) for a third of the salary.

I suppose that makes me a bit of a "type" but hey no big deal.

I kind of feel like in the movie of my life I finished out reel one with the big switcharoo from being a barely makes his way hoodlum to a "respectable" computer guy. I did that for another twenty minutes (years, whatever) but something was always wrong. Yes I got to hang with people who are as geeky as me, I got to have the big house, I got to buy toys all the time, but something was just slightly off kilter.

So here I am beginning reel three where I struggle through the learning process of managing a large number of part time folks, and running a small business in a small town in sub-urban/but still kind of rural South Carolina.

And I haven't posted much in a while because between trying to get 60 hours in for the old software job, and working on the cafe, and learning everything I want to learn before I get open there hasn't been anything else. So if you have been wondering what I've been up to (and I doubt you have) that's it.

This weekend I built tables (pictures soon? probably.) and with a crew of friends we did a ton of small tasks to finish up the outside of the cafe which was mostly painted over mother's day weekend.

The back of the cafe which I see from my window as I type this is looking fantastic. The pride of ownership is really overwhelming. I can't wait to share the place with everyone when I get the doors open.

Many of you will recall my friend Terry who semi-raised Julie as the friend we went to the UK with back in early summer two years ago, and who died a couple of weeks after we got back.

I only became good friends with her brother Kevin in her last year or so. He's one of those friends that I never get to spend enough time with (like

terracinque and a few others on the list). We get together for concerts and occasionally to dust off our respective guitars and make music. He has access to those in-between notes I can't seem to find.

I just found out that his mother died, and that the visitation is tonight, the funeral tomorrow.

I sure wish he could catch a break.

Over the weekend I performed my second wedding.

Though the insanity level rose steadily all weekend up until a few minutes before the ceremony, the ceremony itself was very smooth. Actually I thought it was fantastic.

I got in Saturday around noon. Chris (the groom) and friends were playing board games and coffee was ready within moments of when I came in the door. We had a pleasant few hours catching up and then it was off to Target to pick up some stuff for the visitors including appropriate dinner wear for me as the rehearsal dinner was a bit fancier than I'd planned for.

We got all gussied up and headed over to the rehearsal which was very informal and relaxed. I met Maggie's (the bride's) parents, and some other relatives.

We went to the rehearsal dinner (duck egg roll appetizers with sesame sauce, awesome as was the carrot ginger shrimp soup) and I sat with Maggie's parents and some friends of Chris's from back in Florida. We had rousing chatter, and great food, and after a while we closed the place down and the boys headed over to Chris's place.

We attempted to prepare for the wedding but the license was nowhere to be found. But thinking it could all be straightened out after the honeymoon, we figured it would be no big deal. At around 2:30 I headed back to the hotel so I could catch some sleep.

The next day I got to Chris's just in time to drive over to Summit's to sample the extreme limited edition Rogue 10,000 which was simply lovely.

After that it was back to Chris's to hang out until it was time to get ready to leave. I was not the only tired one: 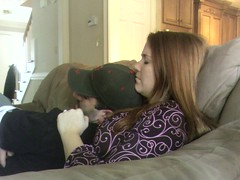 We eventually got dressed and to the wedding. Things were just a tad hectic, I got lost on the way. After arriving things got cranked up a notch. Chris and Maggie were going to read their own vows, and it turned out that Maggie's vows didn't get delivered as expected. About three minutes before the ceremony started we found them, and all was well.

And the ceremony was great. I had a blast delivering it, it was very suitable for the couple, it went smoothly, and I even improvised well when I couldn't read my own handwriting.

At least 50 out of the 60 people there complimented me on the service, many at great length. It was quite a bit of fun.

Unfortunately I had to drive all the way back to SC, so I left around 10:30 and got home at 2:00 the next morning. I'm just now recuperating.

But I'd do it again in a minute.

The wedding was a blast. I'll try to give an update tomorrow when I've had some sleep.

I swore I would never run cable in a business again. And last night I broke my promise. 4 runs of cat-5 in absolutely the most cramped attic I've ever encountered. I literally had to pull myself over rafters and around corners simultaneously on my belly. There simply wasn't enough room to crawl.

The good news is that it's done now, and other than my knees, elbows, ankle and back; nothing hurts.

All my scrapes will be covered by my suit when I perform my second wedding on Sunday. Somehow I avoided injuring my head! And the scrape from last week is gone.

I went with friends to see Elie Wiesel in Charlotte give a talk entitled "Against Indifference." He was very professorial, and quiet spoken, and also very moving. The perfect example of someone who can explain why anger is a good and powerful tool for change, and why hate is not that. As one would expect before he was finished I felt he threw down the challenge for me to do more with my life.

Or considering recent re-consideration to be more in my life.

Having been brought up by pre-hippy, not quite beatnik parents I was raised to be very accepting of others. Even at an early age I realized this meant people who weren't accepting of others, or even me. What he mentioned that applied particularly to me is that without realizing it I've felt pretty self-righteous about exactly that. He talked about the need to be humble before people and that only after that could you be proud of being accepting.

Overall I'm a big fan of pride. It's yet another tool for positive change, the desire to be able to be proud of a skill or an attribute. It generally makes us better people. There's also the fact that I have a big but fragile ego, which is supported by pride quite nicely.

So there's this division I need to pay more attention to between pride and righteousness. I suspect it will require a lot of work, but I suppose it's good work, if you can get it.
Collapse